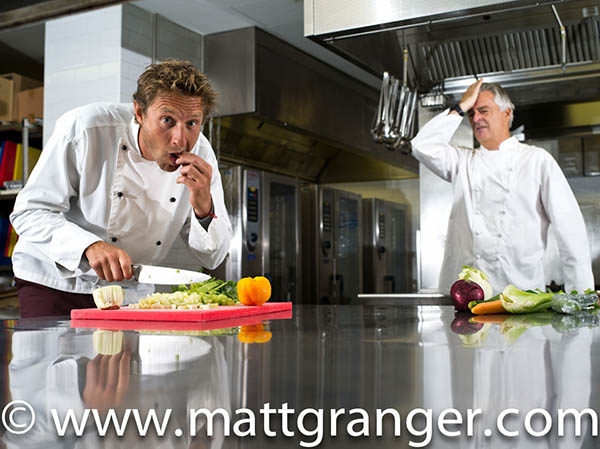 Shooting Sydney Icon Justin Hemmes was a challenge for a few reasons.

Justin Hemmes is a very well known businessman in Sydney - owning a string of the hottest clubs and restaurants in the city. I was thrilled to have the job of shooting him at his Merivale headquarters - and timing worked out in that I had the Pentax 645D to shoot with at that time.

I had around an hour to shoot Justin. Doesn't sound too tough right?

There were a few tricky elements however. Firstly I had to create 5 different images showing the diverse tasks he does, showing how hands on he is in the business, as well as showing beautiful areas of the hotel complex, getting a range of orientations for layout, different clothing options, and a range of colour palates for the images. Oh - and I had never seen the locations, and whilst I had an hour on site, I only had 1-2 minutes of his time for each shot - as he ran from meeting to meeting. The images below are not the final images chosen, but similar. 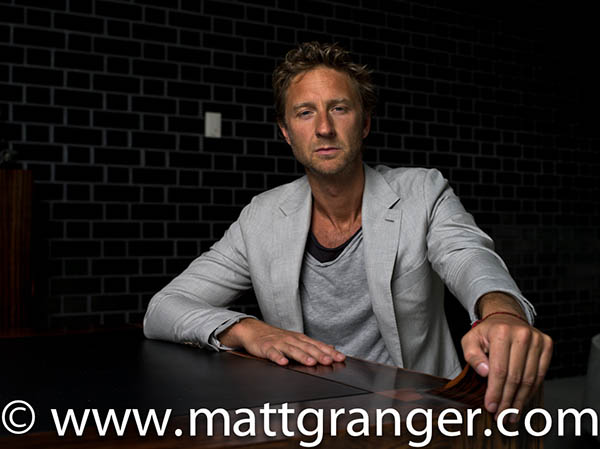 Above was one of the first images taken, in the designer boardroom. For this I set up a single large light, camera left, with soft window light camera right. I took test images with one of his assistants to make sure all of the settings were on track. When Justin arrived he sat, I had him strike a couple of 'casual yet commanding' poses, taking portrait and landscape oriented shots.

Below image is a variation in terms of editing. Basically higher contrast and added clarity. 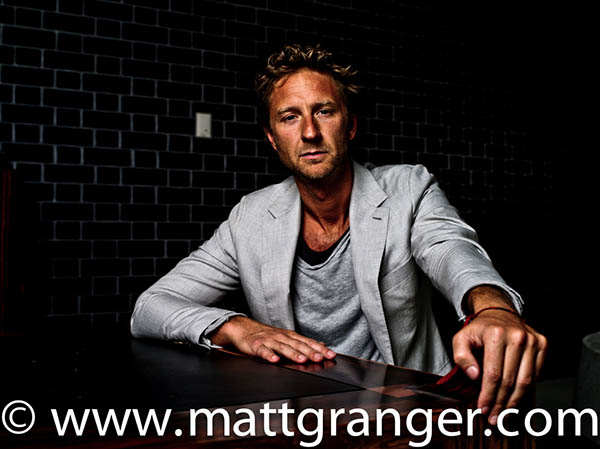 The final image chosen was a similar pose, with an edit so mewhere between these two, and I removed the light switch behind him using the clone tool in Photoshop. 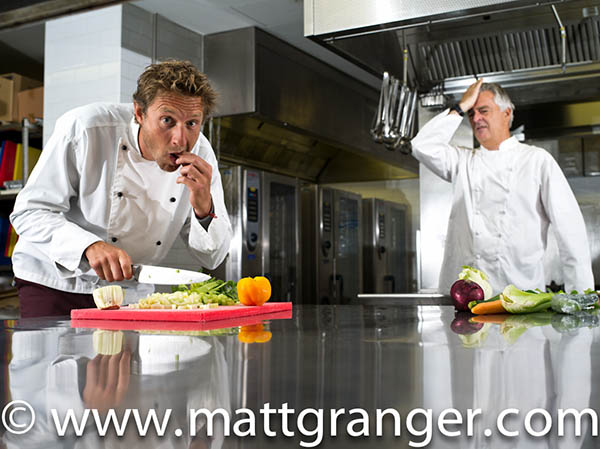 In the above image Justin changed outfits and was joined in the kitchens by Peter Doyle - one of Australia's top chefs. This was one of the 'hands on' shots, and was meant to be a light hearted image.

I can't even remember how many lights we had in this shot - I guess 4 or 5. I focussed on getting the chopping board and Justin's face lit first, then Peter, then balancing the front part of the room whilst letting the back fall away. Then making adjustments to fill in the hard shadows, and then more adjustments to eliminate flares.

I got the call that Justin was on his way, arriving in 2 minutes, and had to leave again almost immediately. Jacket on, he started chopping and playing around - very focussed on the shoot. Peter was not posing per se - that was a real hand to head OMG what a mess reaction, and I was lucky that most of the flashes had recycled and I could grab this shot. However they both had shadows across their torso which needed adjusting. I shot a few more options and Justin was out the door and back to business about 90 seconds after arriving.

We did shoot 5 complete images, including him watering the plants in the greenhouse, working in the luxury outdoor dining area, and going over building plans (with carefull selected 'personality' props in the background).

Fun, challenging and rushed shoot. Whilst i had a bunch of gear with me - the key to getting this job done was establishing great communication with the assistant, being quick and focussed as I scoped out each location, and total focus. When Justin came in I had to know exactly where I wanted him to stand, what pose, what props needed, and his assistant made sure he wore appropriate clothes for each shoot. Justin was not surrounded by a team the whole time, did not have a stylist or make up artist - he selected his own clothes and his assistant helped check all was in place for each shoot.

I admit that walking in the front door at the start of the hour I had no idea how to pull the shoot off - as I had not met Justin (knew his reputation only) and had not seen the spaces. I learnt a lot on this shoot, lessons I have been able to utilise in every shoot since. I strongly encourage you to take on shoots a bit more challenging than you are sure of - just a bit - to stretch yourself. Of course you don't want to take on something completely new and extremely hard if it is a high stakes situation, but it is these stretch situations where you will learn best by doing.