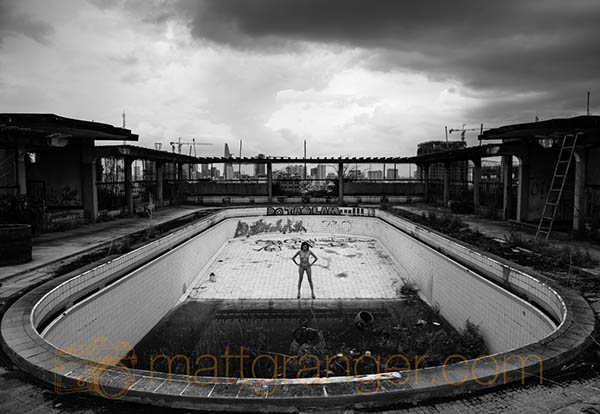 Being a photographer is 80% people skills and persistence. To get this striking, but relatively simple shot took dedication, a bit of sweet talking, and bribery! 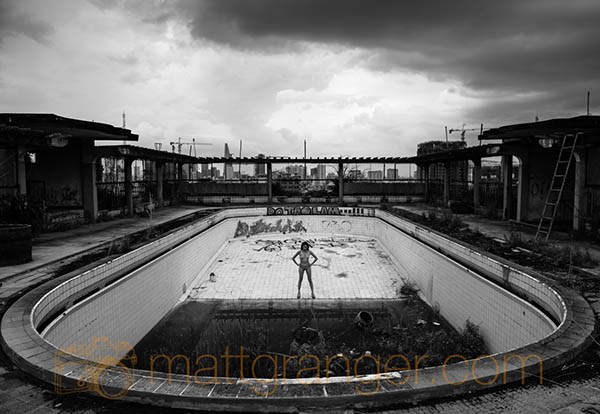 This building is almost abandoned, located in Ho Chi Minh City. It was built during the war for officers, and has fallen into serious disrepair – but some tenants refuse to leave so it cannot be torn down – yet.

To get access we had to ‘hire’ one of the caretakers to escort us, for our own safety. Given the place looked like the set of a horror movie, with broken glass and graffiti everywhere – and all the gear I was carrying, it was probably a good idea.

Model Thi and I shot in several rooms and baloneys throughout the building – then asked if we could get onto the roof – which was padlocked shut.  With some local knowledge and another payment, the caretaker called another guy who had the keys, and we had half an hour to shoot on the roof.

It was a photographers dream, with derelict fountains and an almost empty pool – all in total disarray and perfect for some interesting portrait backgrounds.

To get this shot I was close to the pool with a wide angle lens to get the curvature of the front of the pool, without making Thi look too tiny. Keep in mind the shots for this ongoing project are to be printed large, so the characters are often small in the overall frame.

We had more time to shoot this one, as once Thi was in the pool we didn’t have to worry about people in nearby buildings spotting her. We went through several different set up in the pool, and around the rooftop in our limited time – one of my most memorable shoots to date.

This shot is from my new book - NOW on Kickstater here: https://www.kickstarter.com/projects/matt-granger/public-bodies-nude-in-public-art-nude-photography